The Tennessee Department of Education recently notified Hawkins County Schools that Church Hill Elementary has been named a National Title I Distinguished School. This prestigious honor is awarded to the top schools in the country based on outstanding academic achievements. The National Title I Association highlights the efforts of the schools making significant improvements for their students in one of two categories:

Church Hill Elementary is one of only two schools chosen from over 1,200 Title I schools in the state of Tennessee, and the only school chosen in the category of closing the achievement gap among its students.

Cadet Lieutenant Commander Tayler Bledsoe was honored by American Legion Post 21 on September 29th as Cadet of the Quarter.

Cadet Lieutenant Commander Tayler Bledsoe was selected as the Cadet of the Quarter in part for performance as the Battalion Supply Officer. She was hand-picked from a pool of highly qualified cadets for position, directly responsible for all cadet uniforms and supplies valued at approximately $105,000.00. She also keeps academic records and reports, leads, guides, and directs up to 200 cadets each academic semester.

In May 2014, Cadet Bledsoe was awarded the Military Order of the Purple Heart JROTC Medal for her outstanding unit service and demonstrated leadership ability. To be eligible for this prestigious award the cadet must: (a) have a positive attitude toward NJROTC and a love of their country, (b) hold a current leadership position in the cadet corps, (c) be active in school and community affairs, (d) attain a letter grade of “B” or better in all subjects for the previous semester, and (e) not have been a pervious recipient of this award.
Cadet Bledsoe served as the NJROTC Area Nine East Cadet Cadre Instructor training more than 100 selected NJROTC cadets for leadership roles in their respective units, enhancing their basic attitudes, knowledge and skills required to practice the art of leadership.

Cadet Bledsoe was instrumental in building a high degree of personal honor, self-reliance, and confidence in cadets. When school started back, Cadet Bledsoe fitted over 70 cadets with uniforms by the second week of classes, alleviating wasted time and proceeding on to uniform inspections for new cadets. Cadet Bledsoe’s military uniform appearance is always above reproach and she exemplifies the Navy’s core values of Honor, Courage, and Commitment. 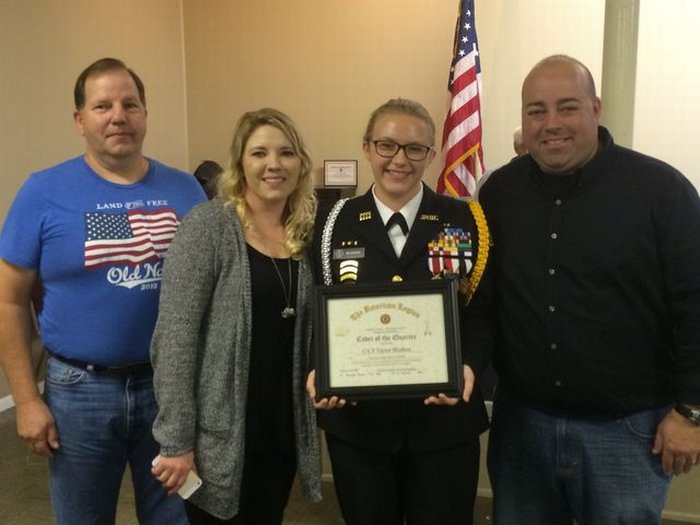 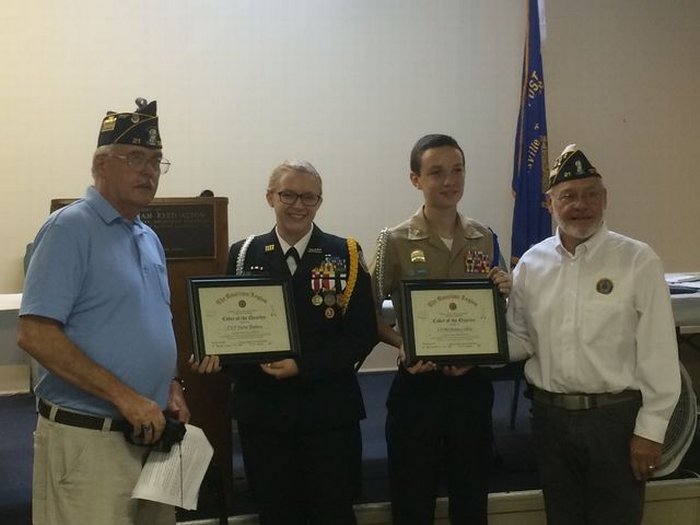 Military Drill teaches Cadets self-discipline, teamwork, attention to detail, and persistence. Cadets drill with and without inert dummy drill rifles, armed and unarmed. Squads are elements of 7-10 Cadets while Platoons are 13-17 Cadets. The Color Guard marches the American flag and organizational flag for ceremonial purposes. The Personnel Inspection teaches Cadets about personal appearance, poise, bearing, confidence, and interviewing skills. Exhibition is a free-style form a drill that Cadets work on alone or with a partner, this includes spins and throws as well as intricate movements. Knock-out is a fun event that tests a Cadet's individual mastery of stationary drill; Armed Knock-out had approximately 75 Cadets to start and Unarmed Knock-out started with more than 200. Cadets are "knocked-out" of the competition if they make a mistake in the eyes of the judges.

The mission of Navy JROTC is to instill the values of citizenship, service to the United States, personal responsibility, and a sense of accomplishment. Trips to military bases and universities around the region help accomplish this mission by showing cadets the opportunities that await upon completion of high school. Cadets receive academic credit for their enrollment in JROTC while earning community service hours, participating in extracurricular activities, and developing leadership attributes. Cadets have no military obligation for participating in JROTC, but they can receive promotion in the armed forces should they choose to enlist.

The four-day trip from October 4 to October 7 took the students to Fort Knox then to the University of Louisville. At Louisville, the Air Force and Army ROTC unit briefed the Cadets about student life, ROTC requirements, and preparing for college. Newly commissioned Army Second Lieutenants gave the Cadets a campus tour.

Following the campus visit, the Cadets proceeded to Naval Station Great Lakes. The Cadets spent a day touring the base, visiting Boatswains Mate School (USS Whitehat), and exploring the Great Lakes Naval Museum. For many of the Cadets, this was the first time they had seen one of the Great Lakes as they walked along the shore of Lake Michigan. The USS Whitehat is an indoor simulated ship used to train young Sailors about rope and line handling, proper refuel and resupply techniques, and small boat handling. At the Great Lakes Naval Museum, the Cadets learned about recruit training and the history of the US Navy. The fourth day of the trip was the long drive home to Church Hill.

The mission of Navy JROTC is to instill the values of citizenship, service to the United States, personal responsibility, and a sense of accomplishment. Trips to military bases and universities around the region help accomplish this mission by showing Cadets opportunities that await upon completion of High School. Cadets receive academic credit for their enrollment in JROTC while earning community service hours, participating in extracurricular activities, and developing leadership attributes. Cadets have no military obligation for participating in JROTC, but they can receive promotion in the armed forces should they chose to enlist.

Junior Reserve Officer Training Corps Instructors selected Cadets from more than 10 schools around the region as the All-Star Leadership Team. Cadets were recognized in a Joint Service JROTC Ceremony during the Johnson City Cardinals game on August 26, 2015. Since no JROTC conference exists, this regional recognition is equivalent to All-Conference recognition in high school sports.

Cadet Commander Emily Rhoton, the Cadet Commanding Officer at Volunteer High School was selected as a member of the All-Star Leadership Team.

Cadet Rhoton is a senior at Volunteer High School and in her fourth year of Navy JROTC. This summer she served as the Commanding Officer of a 13-school High Adventure Camp and Executive Officer of 24-school  Leadership Academy/Basic Leadership Training.  She is a graduate of both Leadership Academy and the prestigious CO/XO School. She is the Team Captain for Drill and Color Guard and was the Team Captain of Orienteering her Junior year. Despite her high level of activity with NJROTC and working a part-time job, Emily has maintained a 4.0 GPA throughout high school. Emily has over 160 hours of community service and is the recipient of JROTC Award from the Military Order of the Purple Heart, The Retired Enlisted Association, and American Veterans. Emily is pursuing a Navy ROTC (Marine Option) Scholarship to attend the Citadel upon graduation with plans to fly for the Marine Corps. She is also enlisting in the Marine Corps as a contingency plan.

Volunteer High School Principal, Mr Bobby Wines, formally presented her certificate in classroom ceremony on Wednesday Sept 2, 2015.
The mission of Navy JROTC is to instill the values of citizenship, service to the United States, personal responsibility, and a sense of accomplishment. Trips to military bases and universities around the region help accomplish this mission by showing Cadets opportunities that await upon completion of High School. Cadets receive academic credit for their enrollment in JROTC while earning community service hours, participating in extracurricular activities, and developing leadership attributes. Cadets have no military obligation for participating in JROTC, but they can receive promotion in the armed forces should they chose to enlist. 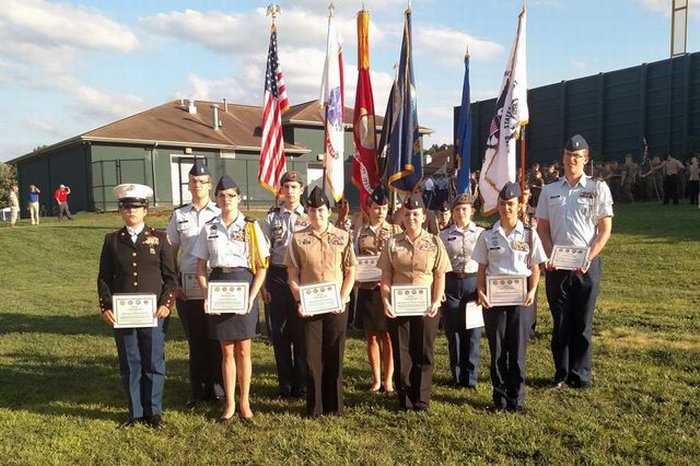 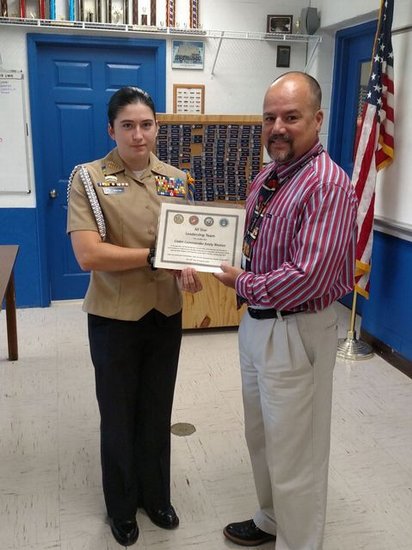 Hawkins County Schools recognized as an Exemplary District by TDOE

2015 District Accountability Tennessee adopted a new accountability system in 2012, after securing a waiver from certain portions of No Child Left Behind. Under the new system, Tennessee looks to districts to increase achievement levels for all students and reduce achievement gaps that exist between certain groups.
Rather than expecting all districts to meet the same benchmarks year after year, the system acknowledges that districts are starting from different places and rewards those that show the most growth.

Meet the majority of their Achievement targets;

Meet the majority of their Gap Closure targets;

Ensure every subgroup—e.g.: Students with Disabilities, racial minorities, and students from economically disadvantaged backgrounds—moves forward in half or more of its target areas.

These three requirements show that districts are raising proficiency levels, narrowing achievement gaps and guaranteeing growth for all students.

The following districts are designated as Exemplary for 2014-15:

Cherokee High School boys basketball coach Jeremy Parrott was Honored for earning his 200th career win in 2014-15, which was his 14th season as Varsity head coach. His 200th win came on Jan. 13 and he finished the season with 204 total wins.

Parrott has coached the Chiefs to seven winning seasons.

Hawkins County Schools had two out of the three schools to be named SCORE Prize Finalists in the Elementary School category for 2013. SCORE (State Collaborative on Reforming Education) reviews elementary, middle and high schools each year and compares them with other high-achieving schools. There are a total of 923 schools that were competing in the elementary category. Although neither of our schools were awarded the overall prize, we are very proud of both schools for being named finalists and for their hardwork and dedication to preparing the children of Hawkins County for the future.

Bobby Wines, principal from Mount Carmel Elementary, addressed his students, parents, staff, and faculty upon returning form the SCORE Prize event. He said, "I truly appreciate the continued support for our school." He went on to say, "The continued growth of Mount Carmel Elementary depends on high expectations, a challenging curriculum, celebrations of success, and the relationships developed betweend all who are involved in educating our children."
Renee Bernard, principal from McPheeter's Bend Elementary stated, "I am extremely proud and honored that McPheeter's Bend was one of the three elementary schools to be recognized for academic excellence by SCORE."

During the SCORE Prize event in Nashville, Dr. Bill Frist, founder of SCORE and former U.S. Senate Majority Leader, said, "Our winners and finalists have shown that it is possible to prepare all our students to be successful in college and the workforce. The stories we heard from teachers, principals, district leaders, students, and other stakeholders are powerful. And they are proof points of what works."

Volunteer High School
VHS had 162 students pass 267 Dual Enrollment classes (approx. 860 hours of college credit) (At $330 per hour, that is $283,800 worth of college credit earned at a fraction of that cost)
We had 19 students achieve passing scores on Advanced Placement tests.

Keplar Elementary School
KES were awarded the 21st CCLC grant with an additional $5000 for increasing student participation for the 2012-13 school year. They will receive a total of $55,000 to fund our before/after school tutoring and summer program.

Mt. Carmel Elementary
Quinn Brooks 4th Grade won first place in his age division at the Upper East Tennessee Science Fair at ETSU!
Math-a-Thon raised $1075.00 for St. Jude’s Children’s Research Hospital
MCES was recognized as a Reward School for performing in the top 5% in the State of Tennessee in Achievement and Growth!
MCES raised $2163.00 for Jump Rope for Hearts